After leaving Kopeikin Gallery and lunch at Canter’s Deli with students from ASU, we moved on to Paris Photo L.A. for our VIP Tour.

Guided by our “muse”, Noelle, we visited several gallery spaces with pieces she thought would be of interest to us. After the tour, we broke into small groups and explored on our own. some of the galleries we visited with Noelle were: Ambach & Rice, where we saw work by Abigail Reynolds; 1301PE, showing work by Uta Barth; Flowers, with work by Mona Kuhn; Kate Werble, exhibiting John Lehr; and work by Nicolai Howalt at Martin Asbaek.

Abigail Reynolds. I’ve seen A New Light on various sites on the web and not been particularly impressed. However, also exhibited were her collage works where she made different types of cuts and folds to expose a different view underneath, which were very interesting.

Uta Barth. Exhibited were some of her photographs from the Deep Blue Day series. These photographs have a certain lightness to them, like the gauze-like curtains obscuring or held back to expose the blue sky outside. Seemingly simple somewhat monochromatic photographs that make the viewer want to see what’s beyond the curtain, even when the curtain is pulled back to show only sky. Even so, there is something soothing about these photographs.

Mona Kuhn. Her latest work deals primarily with reflections and shadows. Nudes photographed through windows with the reflections from the outside visible, obscuring and enhancing the figure on the other side of the glass, or nudes photographed partly in shade, where the darkness of the shadow obscures part of the figure. This is something I’ve seen in the past in her work, and although it’s not a technique I especially care for, I do find it interesting. One of my favorite works by Mona is Marina, 2009 from her Native series.

John Lehr. These are abstract photographs of subjects, such as paint drips on glass at a body shop, graphically interesting images, but somewhat lacking in substance. No that that’s a bad thing, but I really wanted more. Other work by him I’ve seen on line, I do like, especially Window Drawing. Nicolai Howalt. The images exhibited were from his Car Crash series. I was not impressed by this. I made images similar to this in the 70s. Mine were b&w, 8×10, gelatin silver prints, but similar subject matter–abstract images of car damage. He did go a step further and photographed air bags, which we didn’t have in the 70s, but those I found boring. This begged for me to see something different, and I didn’t.

One of the exhibits we viewed was Unedited! LAPD Photo Archives. These were photographs of crime scenes and mug shots from the 20s through the 70s. I had heard about this exhibit and so did many other people, judging from the line to get in, but once inside, I was not moved. The presentation with the photos framed in simple black frames spaced equally around the walls seemed to absorb the impact of the subject matter. I should have felt something from the photographs of gun shot victims and bullet holes in windshields and bodies on the ground, but I left feeling nothing, when I should have felt something. Am I that jaundiced to photos of this nature? I may be in the minority, but the presentation did the subject matter a disservice, such as Victim’s Feet Hanging Off Bed, 1934.

And, of course, as Arizonans, not Arizonians, we had to stop by the Etherton Gallery space, which was exhibiting work by Danny Lyons. 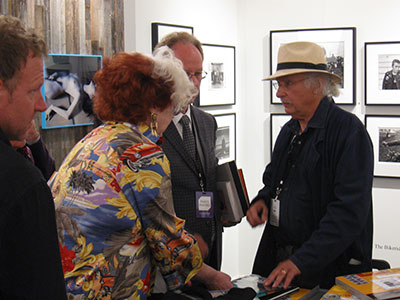 While there I picked up a copy of Danny Lyon’s, The Seventh Dog. I heard this first edition was a press run of 3,000 and a second version for an upcoming exhibition was in progress. When he signed it, he asked, Are you a photographer? I said, Yes. End of conversation. Hopefully, the conversation between Danny and Catherine Opie, who was in line behind me, went better. I was told he doesn’t like his photo taken. Yeah, like I follow directions.

From there, I went off to see Nancy Baron who was signing her book, The Good Life: Palm Springs at Kehrer Verlag. The US edition is due in the fall. 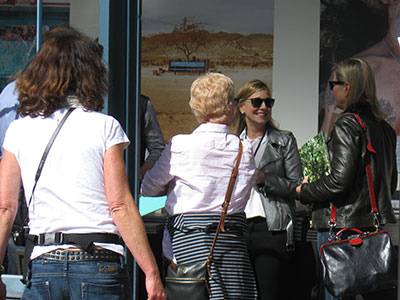 Nancy Baron at her book signing for The Good Life: Palm Springs, at Kehrer Verlag. 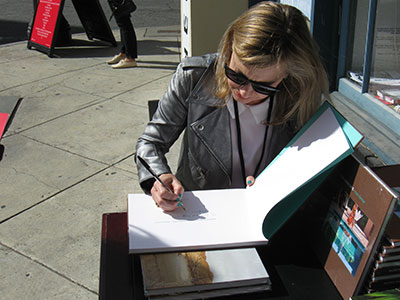 The highlight of my whirlwind tour was seeing work from the Bullet series by Lalla Essaydi at Jenkins Johnson. I’ve seen her work before online, but not as a physical print.  The prints were large and beautiful, and thoughtful at the same time, dealing with gender stereotypes in, and as viewed in, the Moroccan world. I absolutely love Lalla’s work.

Unfortunately it was only a half day at Paris Photo L.A., so everything was rushed, and I’m sure there were a lot of things I missed. Following are some shots from that day. 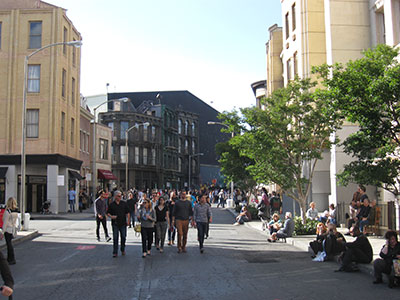 One of the streets at Paramount Studios where Paris Photo L.A. was held. 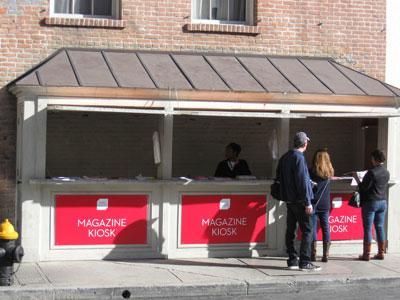 Light along the walls of the back lot buildings. 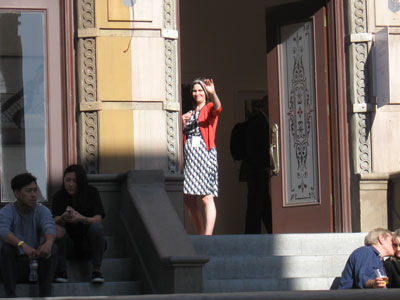 Becky Senf waving from the doorway of one of the gallery spaces.